George Clooney’s The Tender Bar opens in limited release this December before its premiere on Amazon Prime in early January. The coming-of-age drama set in the 1970s and 80s screened at the London Film Festival over the weekend. Early reviews indicate a warm hearted tale that is unlikely to play in the highest profile races like Picture and Director.

Its famous director wooed Oscar voters 16 years ago with his second effort Good Night, and Good Luck. Scoring six nods (including Picture and Director) and winning none, it’s been slim pickings for Clooney’s behind the camera efforts ever since. 2011’s The Ides of March nabbed a sole Adapted Screenplay mention while last year’s The Midnight Sky made the cut in Visual Effects.

As I see it, The Tender Bar could play in two categories. The first is the screenplay adapted by William Monahan. He’s no stranger to Academy attention as he won in 2006 for his penmanship of Martin Scorsese’s The Departed. Inclusion there is less likely than for one of its performers.

That would be Ben Affleck. Another leading man turned writer/director, Affleck has a deep history with Oscar voters that has nothing to do with his acting. In 1997, his Good Will Hunting script with Matt Damon won. Fifteen years later, he directed and produced (hence a second trophy) Best Picture winner Argo. Surprisingly, he didn’t get a spot for his direction.

With a cast featuring Tye Sheridan, Lily Rabe, and Christopher Lloyd, the initial critical praise is being heaped upon Affleck. That’s in addition to some kudos for his supporting work in The Last Duel (out this weekend). Mr. Affleck has been on the radar screen before for his performances – think Hollywoodland, Argo, and last year’s The Way Back. Yet he’s never made the dance. As of now, the Supporting Actor derby for 2021 looks wide open. I’d go as far to say there’s no guaranteed nominees (though Jamie Dornan in Belfast and Richard Jenkins in The Humans look probable). I’ve had Bradley Cooper (Licorice Pizza) listed at #1 for two months, but we still don’t know if his role is meaty enough to truly contend.

This could all contribute to Affleck finally getting some Academy TLC. That said, he’s been in the mix before and come up shy. My Oscar Prediction posts for the films of 2021 will continue… 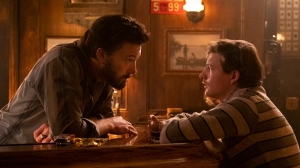