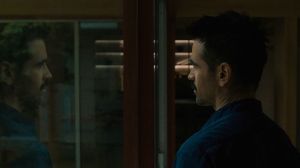 South Korean filmmaker Kogonada became a critical darling in 2017 with the release of his debut Columbus. The romance earned plenty of mentions on the top ten lists of critics, but only garnered awards nods with the independent ceremonies.

The Cannes Film Festival marks the premiere of his sophomore effort After Yang. The sci-fi drama stars Colin Farrell, Jodie Turner-Smith (of Queen & Slim), Haley Lu Richardson, Justin H. Min, Sarita Choudhury, and Clifton Collins Jr. Some of the reviews indicate this could also pop up on some end of year best of countdowns.

2015’s Ex Machina is being mentioned frequently a comparison in terms of quality and the fact that androids are prominently featured. That Alex Garland effort scored an Oscar nod in Original Screenplay and victory for its Visual Effects. With an early 100% rating on Rotten Tomatoes, could After Yang also come before the minds of voters?

First things first – it is uncertain at the moment when Yang will be released. However, the positive buzz likely means A24 will get it out before year’s end. If so, Adapted Screenplay seems to be the biggest possibility. And just perhaps its acclaim could lead to a shot at the big dance. My Oscar Watch posts will continue…